The 3D printing process builds a three-dimensional object from a computer-aided design (CAD) model, usually by successively adding material layer by layer, which is why it is also called additive manufacturing, and unlike conventional machining, casting and forging processes, where material is removed from a stock item or poured into a mold and shaped by means of dies, presses and hammers.

The term "3D printing" covers a variety of processes in which material is joined or solidified under computer control to create a three-dimensional object, with material being added together (such as liquid molecules or powder grains being fused together), typically layer by layer. In the 1990s, 3D-printing techniques were considered suitable only for the production of functional or aesthetical prototypes and a more appropriate term was rapid prototyping. As of 2019 the precision, repeatability and material range have increased to the point that some 3D-printing processes are considered viable as an industrial-production technology, whereby the term additive manufacturing can be used synonymously with "3D printing". One of the key advantages of 3D printing is the ability to produce very complex shapes or geometries, and a prerequisite for producing any 3D printed part is a digital 3D model or a CAD file.

The DDGT department utilizes 3D Printers for a variety of reasons. Students will be asked to create drawing plans based off of a 2D drawing of a part or assembly. We often 3D print parts and assemblies so that students can better visualize the parst and assemblies they are designing. We also utilize the 3D Printers to teach a process known as "Reverse Engineering". Reverse Engineering is when you already have a working part that was made as a functional prototype and then a drawing must be created based on that part. We have a variety of parts that are already printed and students will have one assignment a semester to reverse engineer a part or assembly. This is very common in the industry. Lastly, students create their own designs and 3D print them which they keep. 3D Printing is incorporated in the A.S. Degree two-year program but you can also take DDGT130 Introduction to 3D Printing as a separate stand-alone class.

The DDGT department currently has two Stratasys FDM 3D Printers including the F170 and the Dimensions 768 SST. Both printers maintain automatic operation and are operated with thier own proprietary software. The GrabCAD Print for the F170 and the Catalyst® EX software for the Dimension 768 SST both automatically import STL files, orient the parts, slice the files, generates support structures (if necessary), and will creates a precise deposition path to build your model.  Multiple models can be packed within the build envelope to maximize efficiency.  GrabCAD Print and Catalyst® EX provide queue management capabilities, build time, material status and system status information.  FDM 3D Printers run unattended and provide system and build status information via e-mail, pager, or the Internet. 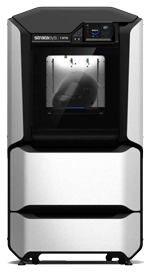